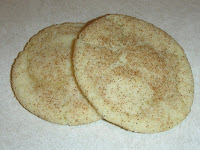 Source: My grandma. I have no idea where she got it.
Yield: 4-5 dozen
This past Christmas saw some rather pathetic Snickerdoodles at our family gatherings. Mine turned out too gooey and underdone. My mother-in-law’s turned out too crispy. I somehow think that making Snickerdoodles is something of an art form. It doesn’t seem like a tough cookie to make, but it has only rarely produced results that have made me happy.
I recently tried this new recipe. (New to me, that is.) My Grandma sent it to me, and gave it good reviews. (She also sent a recipe for Molasses Snickerdoodles that I can’t wait to try!) I think this one is better than the recipe I made last Christmas, but I still wasn’t super happy with the results. I don’t think it’s the recipe, though. I think it’s the baker.
1 cup softened butter
2 cups + 3 T. sugar
2 eggs
1/4 cup milk
1 tsp. vanilla
1/2 tsp. salt
1/2 tsp. cream of tartar
1/2 tsp. baking soda
3 3/4 cups flour
1 tsp. cinnamon
You start by beating the butter for 30 seconds, then adding in the 2 cups of sugar, and beating until it’s fluffy. Add in the eggs, milk, and vanilla, and beat well. Then add in the salt, cream of tartar, baking soda, and flour, and make sure it all gets combined well.
A word about Cream of Tartar. I have struggled with the use of this little ingredient. I don’t love the way it makes the cookie taste, so I have frequently left it out. It is really there to help control the acidity of the cookie, and since baking cookies is rather similar to a chemistry experiment, it is probably best to leave it in. I debated about whether to put it in today. What ended up making my decision was the cupboard. There was no cream of tartar in it. (Well, to be truthful, there was a full container, but it was in packaging that hasn’t been sold in probably 20 years, so I was leery about using it.) Anyway, I left it out, and I kind of wish I had put it in. I think next time I make this recipe, I will. End of boring speech about cream of tartar. 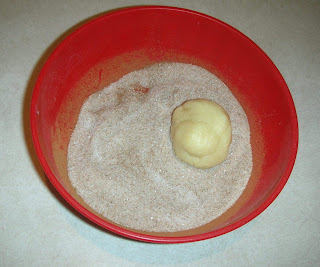 You will need to make a mixture of cinnamon and sugar for this next step. I used 3 T. sugar and 1 tsp. cinnamon. I used almost every last bit of it.
You roll the dough into little balls, roll the balls in the cinnamon-sugar mixture, and then place them on a baking sheet. 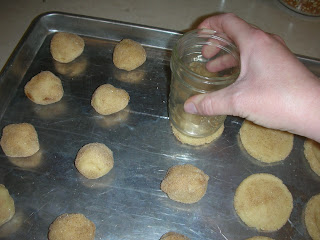 The recipe calls for you to smash the dough-balls down with a drinking glass to flatten them before baking. With my first pan-full, I did that. I was not thrilled with the results. They were running into each other, baking up into shapes that were, let’s say, less than round, and generally looking not-so-appetizing. So, for my second pan-full, I baked them first, and then smashed them. 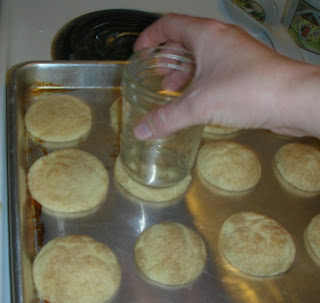 Only I don’t think I baked them quite long enough. The recipe calls for 8 minutes at 375 degrees. However, when you don’t smash them down first, I think they could use an extra minute.
On my third pan-full, I forgot to set the timer (possibly the most irritating and easily made mistake for the cookie baker!), and I let them go a little long. They were getting brown on top when I removed them. These actually turned out the best. 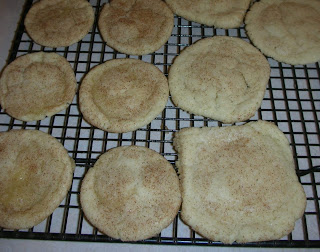 As you can see, there was quite a difference in how the different batches looked. The cookies on the right in the photo above were from the first batch, the press-before-baking batch. They are pretty ugly. Those on the left are from the second batch, and are beautifully and perfectly round. I love that. It looks so professional. Like they were made by a capable adult and not a 6-year old child.
So, to sum up, my recommendations are:
1. Use the cream of tartar.
2. Smash after baking
3. (and I cannot believe I’m saying this) do not underbake. Consider pushing the baking time to 9 minutes.
4. Enjoy with a big glass of milk.