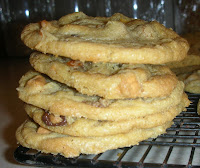 A recipe for a classic cookie with a little bit of everything in it!

Yield: about 4-5 dozen cookies
I should call this post “A Failed Experiment in Kitchen Sink Cookies.” They did not turn out at all like I wanted. I was supremely disappointed.
Our neighbor, Karl, makes these cookies, and I first fell in love with them when his wife gave me one. They are possibly the best cookies I have ever had. They have a little bit of everything in them. Karl didn’t have a name for them, or a recipe, for that matter, so, consequently, I have dubbed them the Kitchen Sink Cookie.
I was unsuccessful at procuring a recipe for this wonderful creation. It’s not that Karl is unwilling to share, it’s more like he doesn’t have a recipe. He makes it from feel, so to speak, and thus it is a little different each time he makes it. Undeterred, I set out to recreate it from my own experience and knowledge. I won’t call it an epic failure, but I was definitely disappointed.
I started with a basic chocolate chip cookie recipe:
1 cup shortening
1 cup brown sugar
1/2 cup sugar
2 eggs
1 tsp. vanilla
1 tsp. salt
1 tsp. baking soda
2 cups flour
Then I added a bunch more ingredients. 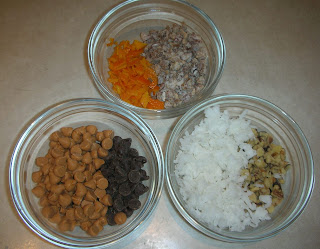 In these bowls are chocolate chips, butterscotch chips, chopped walnuts, coconut, chopped orange peel, and dates.
Karl uses craisins. I thought I had craisins in my pantry, but it turned out I didn’t. I used the dates I had leftover from making the Graham Cracker Pudding, so I used those instead.
I’m actually looking forward to giving these another shot. Next time I will make the following changes:
1. Using craisins and not dates.
2. Using more walnuts. (as you can see, I only used about 1/4 or 1/3 cup. It was not enough.)
3. Using more coconut.
4. Using less orange peel. I like the orangey flavor it gives, but I think a teaspoon would be plenty.
5. Using a different chocolate chip cookie recipe. Maybe one which calls for butter instead of shortening. We’ll see.
On the bright side, the butterscotch chips were perfect!
I baked them for about 8 minutes at 350 degrees.
They were good, but not Karl Wilson good. I’ll figure this out yet.